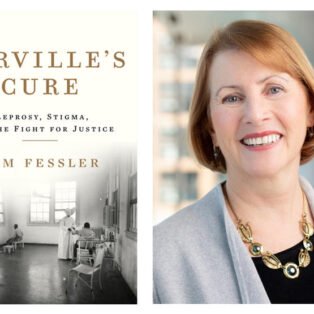 Enjoy these conversations? Please consider donating to support Hill Center programs like this. The price of a ticket would normally be $10, but during our closure, we have made access to this program free. You can add a donation when you secure your ticket at checkout.

Pam Fessler is the author of “Carville’s Cure: Leprosy, Stigma, and the Fight for Justice” and a correspondent on NPR’s National Desk, where she covers poverty, philanthropy and voting issues.

Carville’s Cure is the unknown story of the only leprosy colony in the continental United States, and the thousands of Americans who were exiled―hidden away with their “shameful” disease.

Between Baton Rouge and New Orleans, the Mississippi River curls around an old plantation thick with trees, with a stately white manor house at its heart. Locals knew it as Carville―the site of the only leprosarium in the continental United States from 1894 until 1999, where generations of afflicted Americans were isolated, often until death. While experts today know that leprosy is not nearly as contagious as once feared, there remains a virulent stigma around those who suffer from it.

Pam Fessler tells the story of Carville as the U. S. tries to deal with another infectious disease, COVID-19.  She shows how ignorance and prejudice about leprosy led to an ill-advised public health policy and that important lessons can be learned for today, when disease is still used to denigrate those seen as “others.” Fessler reveals how, in the case of Carville, patients rallied together with an unlikely team of nuns, researchers and doctors to find a cure for the disease, and to fight the insidious stigma that surrounded it.

Lynn Neary recently retired from NPR, where she was a long-time host and arts correspondent covering books and publishing.

Books are available for purchase from East City Bookshop here.

This will be a live, interactive conversation. Participants will receive the Zoom invitation the day prior and will be able to submit questions via the chat function during the conversation.