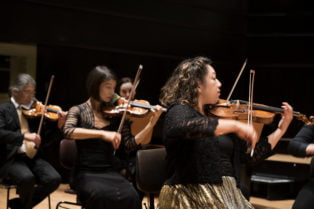 In partnership with Hill Center and Washington Performing Arts, musicians from the Orpheus Chamber Orchestra present a chamber concert inspired by Shakespeare and other works of poetry and theater. Orpheus was formed in 1972 by a group of young artists who made history by creating an orchestra without a conductor in which musicians led themselves democratically. An essential part of New York City’s cultural landscape, Orpheus presents annual series at Carnegie Hall and 92Y.

As part of SHIFT: A Festival of American Orchestras, Orpheus will perform “A Harlem Dream,” an original collaboration with the Classical Theatre of Harlem, co-presented by the John. F. Kennedy Center for the Performing Arts and Washington Performing Arts.

This chamber concert is made possible by support from the Capitol Hill Community Foundation.

Co-presented by The John F. Kennedy Center for the Performing Arts & Washington Performing Arts in collaboration with the League of American Orchestras as part of #SHIFTmusic: www.shiftfestival.org

About SHIFT: A Festival of American Orchestras
SHIFT celebrates the vitality, identity, and extraordinary artistry of orchestras and chamber orchestras in an immersive festival experience in the nation’s capital. The week-long festival is composed of mini-residencies, with each participating orchestra presenting education and community events in venues around Washington, DC, along with full-orchestra performances in the Kennedy Center Concert Hall.