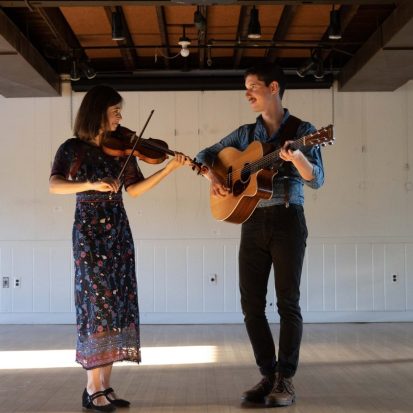 Fiddle champion Maura Shawn Scanlin and guitarist Conor Hearn unite to form Rakish. The pair gets their namesake from the traditional Irish tune Rakish Paddy, an origin that aptly suits the duo and their shared background in traditional Irish and Scottish music. Yet “rakish” itself also suggests something strikingly unconventional in its appearance, and Maura and Conor knowingly embrace this wealth of connotation in their music, drawing on the music they grew up with and performing it with their own slant. In a performance that is something more akin to concert music, Rakish explores tunes and songs from Irish and American folk traditions in a way that reflects their shared interest in and love for chamber and improvised music. Rakish released its debut album, Counting Down the Hours (produced by the great Seamus Egan of Solas fame), to enthusiastic acclaim.

Beer, wine, and other concessions will be available for purchase!

Maura Shawn, a two-time U.S. National Scottish Fiddle Champion and a winner of the Glenfiddich Fiddle Competition, wields the technical range of an accomplished classical violinist and the deep sensitivity of a traditional musician. Conor, a native to the Irish music communities of Washington, D.C. and Baltimore, MD, makes his home in Boston playing guitar for a number of traditional music acts and bands.

About Jim Thomson: Jim Thomson owns and operates the Brooklyn and Washington, DC-based boutique record label Electric Cowbell Records. He currently runs Multiflora Productions out of Washington, DC, a multifaceted, multicultural agency that specializes in expanding the reach of genre-bending roots-to-the-future music through artist management, event marketing, and music releases. In 2014 he became the music coordinator for the Capital Fringe Festival and also programs the “Fringe Music in the Library” series, which offers free live music in the DC Public Libraries through a sponsorship from the DC Public Library Foundation. He played drums in GWAR, Alter-Natives, Bio Ritmo, and CSC Funk Band. He currently plays drums in the DC-based band, Time Is Fire, which is fronted by an Iranian-born Sufi poet and backed by players steeped in punk, dance, and experimental music. Jim is currently an editor-at-large for The Vinyl District, an indie record store blog that focuses on the vinyl record medium.