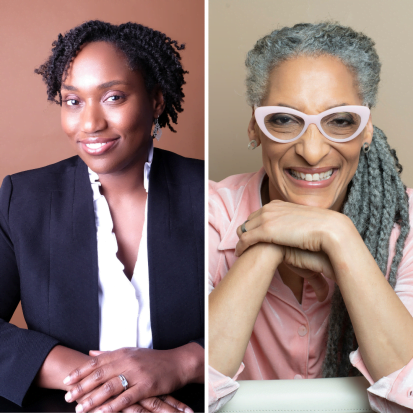 East City Bookshop will have books available for sale and signing — purchase your advance copy here!

The event will be in-person at Hill Center and streamed live on our Facebook page.

For in-person attendance, we require all attendees to be vaccinated against COVID-19.

About Dr. Chatelain: Dr. Marcia Chatelain, Professor of History and African American Studies at Georgetown University has penned a stunning story of post 1960s urban Black America. Franchise is the winner of the 2021 Pulitzer Prize in History, the 2022 James Beard Foundation Book Award, and was recognized as a New York Times Best Books of 2020 with the Times noting that Franchise is a “smart and capacious history…a serious work of history.”

Marcia Chatelain interests include women’s and girls’ history as well as black capitalism. In 2021, in addition to the Pulitzer Prize, Chatelain received the Hagley Prize in Business History, and the Organization of American Historians (OAH) Lawrence W. Levine Award for Franchise. An active public speaker and educational consultant, Chatelain has received awards and honors from the Ford Foundation, the American Association of University Women, and the German Marshall Fund of the United States. At Georgetown, she has won several teaching awards. In 2016, the Chronicle of Higher Education named her a Top Influencer in academia in recognition of her social media campaign #FergusonSyllabus, which implored educators to facilitate discussions about the crisis in Ferguson, Missouri in 2014. She has held an Eric and Wendy Schmidt Fellowship at New America, a National Endowment for the Humanities Faculty Fellowship, and an Andrew Carnegie Fellowship.

About Chef Hall: Carla Hall first won over audiences when she competed on Bravo’s “Top Chef” and “Top Chef: All Stars” and shared her philosophy to always cook with love.  She is a trained chef who has worked in several professional restaurant kitchens in and around the Washington, D.C. area and believes food connects us all, a belief she strives to convey through her work, her cooking, and in her daily interactions with others.

Carla spent 7 years co-hosting ABC’s Emmy award winning, popular lifestyle series “The Chew”, and is currently featured on the Food Network in shows such as “Thanksgiving, Holiday and Halloween Baking Championships” (judge),  and “Worst Cooks in America”.  Her latest cookbook, Carla Hall’s Soul Food: Everyday and Celebration, was published in 2018, landing on annual “Best Cookbook” lists across the country and receiving an NAACP Image Awards nomination.

We look forward to welcoming this brilliant historian and renowned chef to Hill Center for what promises to be an enthralling conversation.