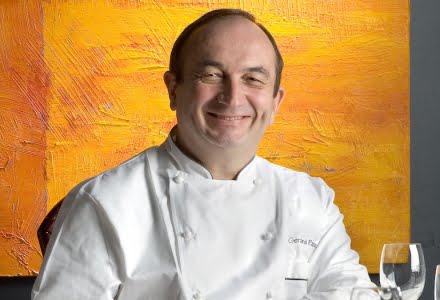 Chef Gérard Pangaud has cooked for Mick Jagger, Ronald Reagan and Omar Sharif. And since the fall of 2014, he has been cooking for patrons of Hill Center. Because his reputation precedes him, classes sell out quickly. He has groupies. Students often use their phones while in one class to sign up for another.

“Mick Jagger loved my food at my restaurant in Paris, then followed me to New York, then to D.C.,” says Pangaud. The chef follows him too: “I love the Rolling Stones,” he says. Sharif was a regular customer – and a bridge partner – in Paris.

“Chef Gérard’s followers value him for his opinions  on restaurants, where he does his grocery shopping, what purveyors he sources from,” says Charlotte Oman, Hill Center’s programming coordinator. “But mostly they value his knowledge of cooking techniques and his intuition in creating a dish.” While he hands out recipes to students, he doesn’t follow them himself.

“I love teaching people to cook better and I enjoy the community on Capitol Hill,” Pangaud says. “Capitol Hill is in many ways the most European part of the city.” He says he appreciates the diversity and inclusiveness of the people who live there. “There’s a sense of community and neighborhood you don’t feel in other parts of the city.”

“The restaurants are more neighborhood restaurants,” he adds. “They don’t care so much about being flashy or about a big bar. They’re smaller – European style.” Having Eastern Market and Union Market nearby he also finds more European than neighborhoods that rely solely on supermarkets.

Pangaud was a celebrity chef before reality cooking shows, before “locavore” was a common term, before every supermarket carried unrefined sea salt.

Born in a Paris (France) suburb, he grew up in a family where both his parents were good cooks. After high school, Pangaud went to French and American schools of restaurant and hotel administration, apprenticed at distinguished French restaurants and then worked for prominent chefs including  those at two three-star Michelin restaurants.

He opened Rue Montmartre, a small Parisian restaurant that he renamed Gérard Pangaud and moved to Boulogne. Within two months, it was awarded two Michelin stars. He was not  yet 28, the youngest chef to be awarded two Michelin stars. In 1982, French President Francois Mitterand chose Pangaud as chef to the world leaders attending the G-7 Conference in Versailles. President Ronald Reagan, Prime Minister Margaret Thatcher and Chancellor Helmut Schmidt were treated to Pangaud’s signature dish – poached lobster with ginger, lime and Sauternes – a dish Washingtonians were to relish a decade later.

Pangaud moved to the U.S. in 1985 to become executive chef at Aurora, which became one of the hottest restaurants in New York.

“You only have food where you have money, and there is no more money in France,” Pangaud was quoted as saying in a 1985 story in The New York Times. “The money is here, in New York. That is why New York is becoming a world center for food.” He was one of many young European chefs looking for new opportunity in America where food was becoming a sophisticated recreation.

Pangaud moved to Washington, D.C., in 1991 and opened Gérard’s two years later, bringing his famous lobster dish with him. The restaurant, which closed about 10 years ago, consistently topped critics’ lists.

The chef, however, is not all about cooking food. He also draws and paints food and reads books about food. He studied art for many years at the Corcoran College of Art and Design where he did pencil or charcoal drawings and large acrylic paintings, many of food.

When Pangaud is not reading, teaching and cooking, he is probably on the golf course. “I like to play golf and I like to do art,” he says. “More art in the winter and golf in the summer.”

Congratulations to the Artists Featured in our 2022 Capitol Hill Art League Juried Exhibition!