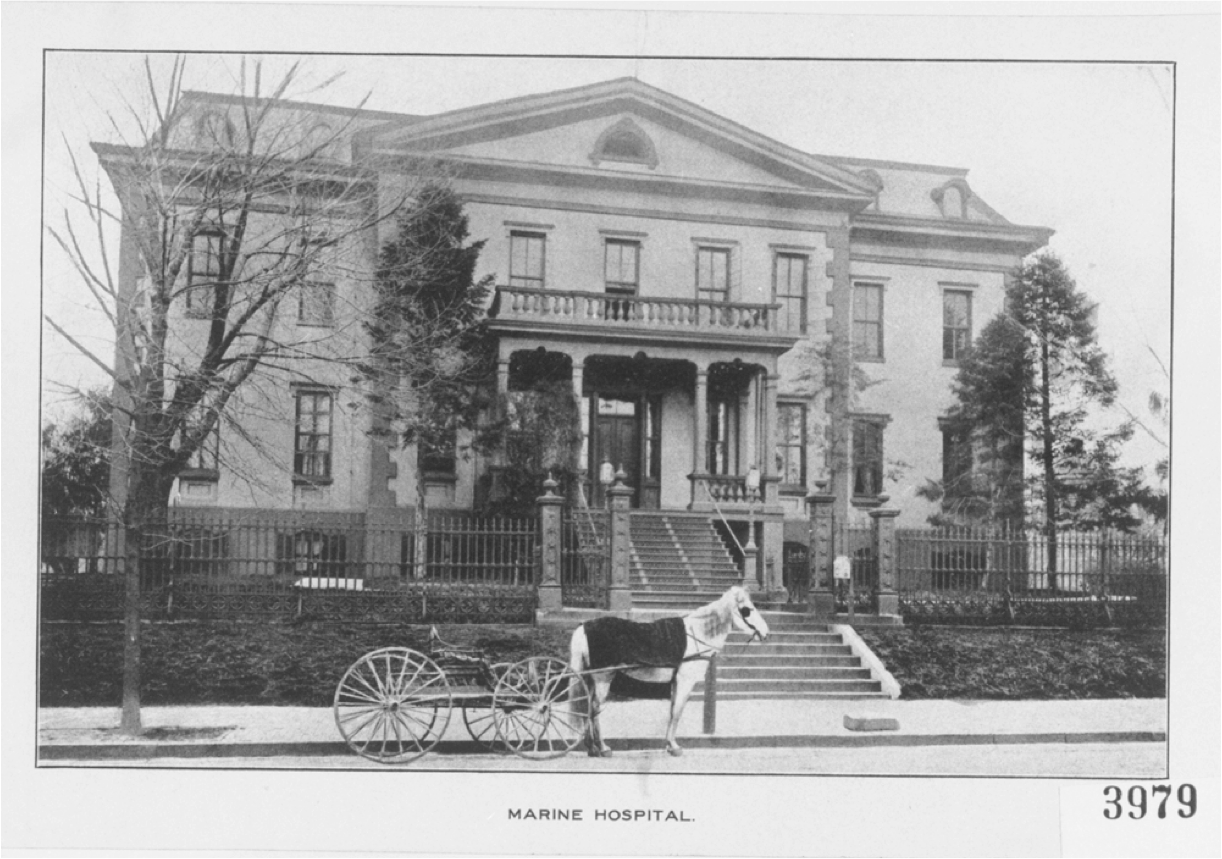 My husband Ari and I bought a condo on East Capitol Street SE in 2002. Every weekend, we explored our new neighborhood on foot; one day in 2002 or 2003, we can’t quite recall, we walked by an elegant old building on Pennsylvania Ave SE at 9th Street, partially boarded up but still stately. We stopped to peer through the iron fence that surrounded it.

A man was walking up the path toward the stairs. “Hi!” he said. “Can I help you?”

“What is this place?” we asked the man.

“Well, it was a Civil War-era hospital. Do you want to come inside? I’ll show you around.”

I recall a chalkboard on the wall of one of the rooms, which were dark and dusty and filled with metal desks and boxes of papers (apparently the District had used it for office space for a while). Dan gestured toward a name written on the board: Benjamin Drummond. “He was the first person treated here after the hospital opened on October 1, 1866.”

Fast-forward to 2016, when my band, Dead Men’s Hollow, had just completed a performance in the glorious Lincoln Room inside Hill Center. Karl Kindel, who like Dan had been a Friend of the Old Naval Hospital, approached me to shake my hand and thank me for our performance.

Karl had a proposal: “I’d like you to write a song about Benjamin Drummond, the first patient treated here.” A faint bell rang in my brain as I recalled the impromptu tour Dan had given Ari and I more than a decade ago. “I’d love to,” I said.

For the Friends of the Old Naval Hospital

Dan, Karl, Ann Goodwin and others attached to Hill Center and to the Friends group led me to information about Benjamin Drummond and the hospital itself I could use in the song. I learned he was an African-American man born in New York, that he enlisted as a teen, that the wound he got during a skirmish in Texas reopened during a subsequent battle in South Carolina. I read that he was married to a woman named Laura and that they had a son (also named Benjamin) and that he asked the government to increase his pension to help him take care of his family after he was honorably discharged. I began to hope that his time in the hospital had been one of peace after the carnage he must have witnessed and the pain he had endured. I wondered whether in his shoes I could have been as brave as Drummond, who died at age 38.

I eventually brought draft lyrics and a working melody to my bandmates. Together we tweaked the words, added a bridge based on an old sea chantey and explored different keys. We collectively raised it from a baby composition into a fully-grown tune.

Dead Men’s Hollow’s song is called “Jenkins Hill,” which is the former name for Capitol Hill. We hope that in some small way it pays homage to this long-gone person who was cared for in this very building, and who served his country well.

Formed in 2001, Dead Men’s Hollow — whose “ striking harmonies, solid songcraft [and] gospel string band sound … evokes a blend of the traditional and the transcendent,” according to The Washington Post – takes its name from the piece of Arlington just over the river from Georgetown, across the Key Bridge. Following the Civil War, “Dead Men’s Hollow” was a dangerous place to procure moonshine, weapons, female companionship; only a fool would cross that bridge – then know as the Aqueduct Bridge – from Washington without some friends and a few extra rounds on hand.

Voters in Washington, D.C., elected their first mayor since the Civil War the same year…