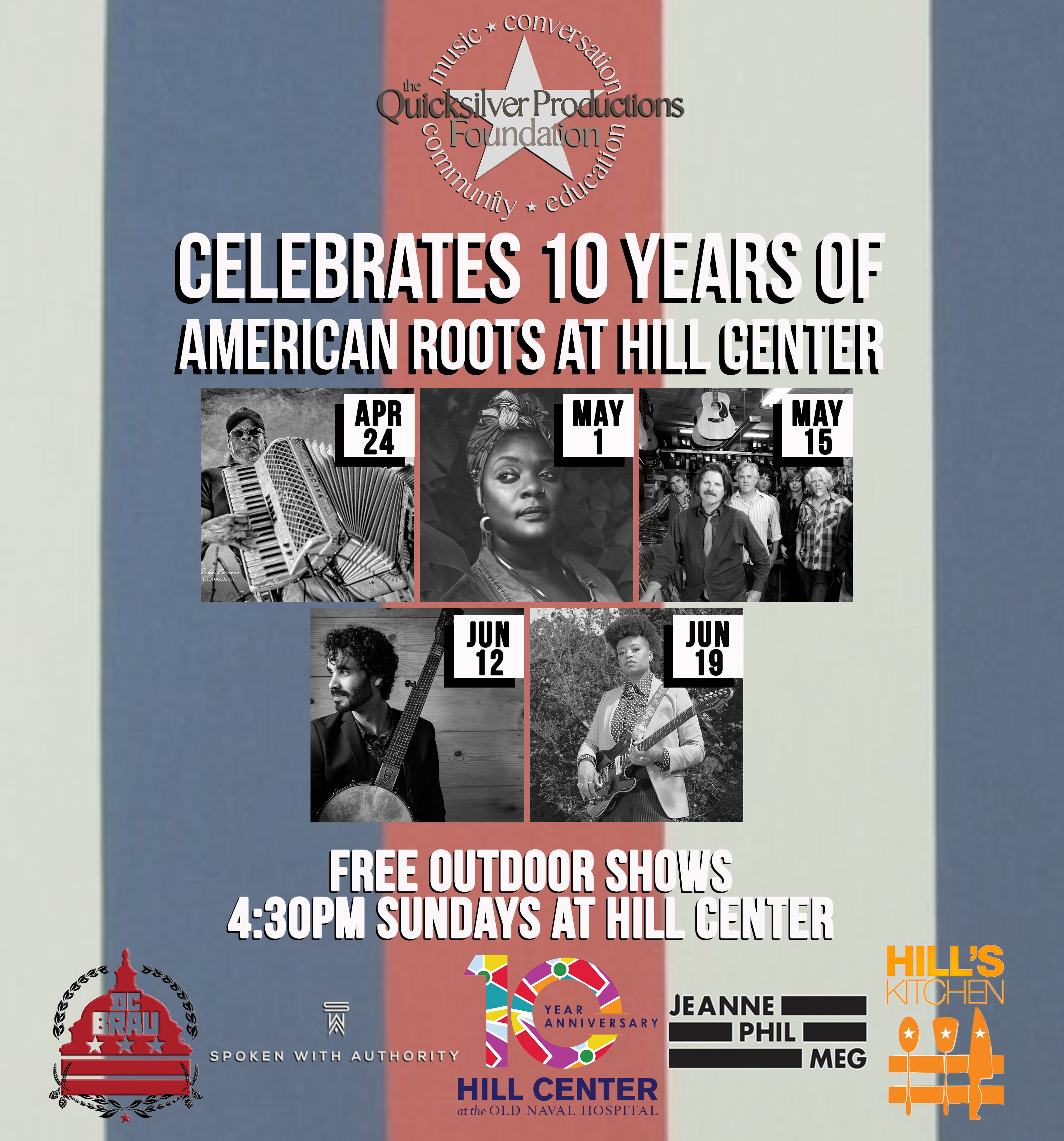 Hill Center and Quicksilver Productions have been grateful to host many incredible artists as part of our American Roots Concert Series, hosting free outdoor shows since 2012. This year, the line up is as fantastic as always! Read more below to see who is coming to Hill Center this Spring, and reserve your tickets before they’re gone! All shows are on Sundays from 4:30pm-6:30pm.

“This music is about as real as it gets. Zydeco accordionist CJ Chenier takes the mantle from his father and uncles, Clifton and Cleveland respectively, and puts out a hard hitting boogie and blues disc..”

“Wherever she plants her feet, she does so with righteous conviction and a strong sense of her own voice”

Kyshona has always lent her voice and music to those that feel they have been silenced or forgotten. She began her career as a music therapist, writing her first songs with her patients–the students and inmates under her care. She soon found the need to write independently and find her own voice, and endeavor which led her to the fertile ground of the Nashville creative community and songwriting culture. Since then, she has learned how to balance her music career with her passion to heal the hurting. Audiences will find a common thread of empowerment, overcoming adversity, and finding hope in her work.

“The group, whose members have played with a variety of acts including Patty Griffin, Josh Ritter and the J. Geils Band, expertly blends vintage American roots music styles —from country to jazz to rock —in a rowdy but deft fashion.”

Session Americana (Boston) is a rock band in a tea cup, or possibly a folk band in a whiskey bottle. This band/collective of talented musicians craft anmusical experience unlike any other. On stage is a collapsible bar table wired with microphones, a vintage suitcase recast as a kick drum, an old Estey field organ, a pre-war parlor guitar, a mandocello and all of its smaller siblings, a harmonica case fire damaged when Jack’s bar went up in flames and graffitied by Depeche Mode roadies, and an assortment of other instruments that get passed around in this freewheeling modern hootenanny. The anything-could-happen feel of a Session show depends on craft that’s not accidental or easily won; they bring a kind of ease and genuineness to this timeless music, sometimes presenting the latest batch of original songs, sometimes reaching back into depths of the American “song bag”.

“On top of being wildly intelligent and knowledgeable, he’s also a killer musician and it’s an incredible combo.”

Jake Blount is an award-winning banjoist, fiddler, singer and ethnomusicologist based in Providence, RI.  He is half of the internationally touring duo Tui, a 2020 recipient of the Steve Martin Banjo Prize, and a board member of Bluegrass Pride. He is a two-time winner and many-time finalist of the Appalachian String Band Music Festival (better known as Clifftop). Blount specializes in the music of Black communities in the southeastern United States, and in the regional style of the Finger Lakes. A versatile performer, Blount interpolates blues, bluegrass and spirituals into the old-time string band tradition he belongs to. He foregrounds the experiences of queer people and people of color in his work. His teachers include Rhiannon Giddens, Bruce Molsky and Judy Hyman.

“Amythyst Kiah Found Her Powerful Voice. Now She Has a Sound to Match It.”

The Rounder Records debut from Amythyst Kiah, Wary + Strange marks the glorious collision of two vastly different worlds: the iconoclastic alt-rock that first sparked her musical passion, and the roots/old-time-music scene where she’s found breakout success in recent years, including recognition from Rolling Stone as “one of Americana’s great up-and-coming secrets.” Along with tapping into the vibrant musicality she honed in part through her studies in East Tennessee State University’s Bluegrass, Old Time, Country Music program, the Chattanooga-bred singer/songwriter expands on the uncompromising artistry she’s displayed as a member of Our Native Daughters—an all-women-of-color supergroup whose Kiah-penned standout “Black Myself” earned a GRAMMY nomination for Best American Roots Song and won Song of the Year at the Folk Alliance International Awards.

Thank you to all our sponsors!

Congratulations to all the fantastic artists from this year's Regional Juried Exhibit! This year’s show…