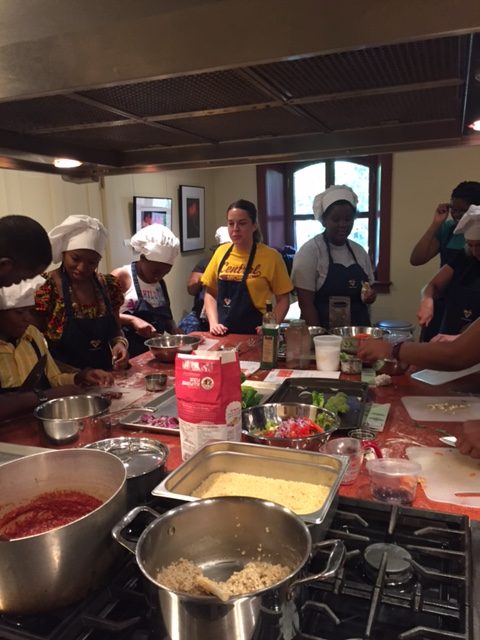 Monica Utsey said she didn’t know pizza could be a healthy dinner before she enrolled in the family cooking class at Hill Center. “I didn’t realize how healthy pizza could be and how much better and cheaper it is to make it on your own,” she said.

Utsey and her two children, 16-year-old Zion and 10-year-old Ayinde, have been cooking and eating dinner together on Tuesday nights this summer in a class that teaches parents and their children how to cook healthful, economic meals. The class is a collaboration among Hill Center; Common Threads, a non-profit organization that is working to prevent childhood obesity through healthful cooking, and Brainy Camps, a Children’s National Health System program for children with chronic health problems. Common Threads is able to provide the instructors, food, curriculum and even chefs hats and aprons free of charge thanks to a grant from the O’Neill Foundation.

Experienced chefs provide two-hour, hands-on cooking classes in Hill Center’s kitchen. Three six-session classes were offered in the summer of 2016, two on Sunday afternoons as well as the Tuesday night class. “It’s been so great to learn from a chef,” Utsey said.

“The goal of the class is to use food as a vehicle to make good nutrition choices, teach cooking basics and get parents and kids to interact around food,” said Chef Mark Seidler who teaches the Tuesday night class. The class is also taught to do smart shopping through a virtual supermarket tour. They are shown how to read nutrition labels, look for value by reading unit prices and encouraged to “shop the perimeter” of the store where the fresh produce, meat, seafood and dairy are located.

“The program takes a holistic approach,” said Seidler, “and eating together is a big component.” Utsey said she loves the idea of family instruction, and added it gives her a chance spend time with her children. “We get buy-in as a family, and we encourage them to shop together as well as cook together,” Seidler said. “It’s great to have parents because we have a sense that they’re taking the learning home.” Each class starts with a few minutes of exercise to emphasize the importance of keeping fit as well as eating well.

In his Tuesday night class on pizza making, chef Mark Seidler emphasized both value and nutrition. “When something is homemade, one gets to control what ingredients go into it and what don’t,” he said. “Also how labor, advertising and packaging costs are factored into store-bought items.”

The families made pizza dough with one third whole wheat flour to two-thirds white flour, for example, to include a whole grain. Oils were kept to a minimum and toppings were fresh ingredients with no preservatives.

Utsey also said she had no idea how to handle a knife before she started the Hill Center class, but learned to do so early in the program. Students learn basic knife skills such as dicing, planking and rock and chop. “Most importantly,” Seidler said, “is the positioning of the non-cutting hand into a ‘bear claw’ so as to prevent fingers from being cut.” When he asked students in class how to hold the hand without the knife he was greeted with a chorus of “bear claw.”

Asaiah Jean-Julien, 11, and his four siblings were also in Seidler’s class. “We learned how to chop properly, how to make chicken, how to make granola and how to make quinoa salad,” Asaiah said. “The chicken and quinoa salad were really good and we’ve done it at home.”

One week Seidler showed the class how to do roasted cauliflower two ways – one with a five-spice seasoning blend and the other with a sauce for hot wings. Students told volunteer Rachel Ernzen that they tried the latter at home. “Most people wouldn’t think of dressing a vegetable with wing sauce,” Ernzen said. “We try to think a bit outside the box.”

There is one volunteer for every five students in the class. Ernzen recently finished a physicians assistant program at George Washington University, before which she worked as a nutritionist. “This is a great opportunity to actually make something together and not just give people information,” she said. “And, they come away with new skills.”

For the last class of the season, the students got to choose the meal from a list given to them by the instructor. They chose beef stew and apple crumble, and Seidler explained using a marinade, how to make rice, the way to get fresh thyme off the stem and the need for planning so the dessert was ready at the end of the meal. By this time in the session, students were throwing around terms such as mis en place as well as “bearclaw.”

Seidler was whistful as his last class began and told his students he felt sad that the classes were ending. “I wake up on Tuesday,” he said, “and know it will be a fun day.”

by Jeff Zippin As big fans of Hill Center programs, it was a no-brainer for…

Gérard Pangaud and the Art of French Cooking

Chef Gérard Pangaud has cooked for Mick Jagger, Ronald Reagan and Omar Sharif. And since…